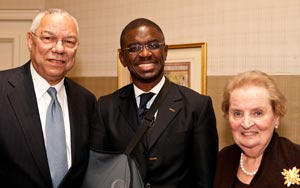 “Investing in successful African businesses will advance an expanding cycle of economic activity and development, which I believe will produce world-class multinational corporations – and long-term prosperity for Africa’s people – by the end of this century.” – Papa Madiaw Ndiaye

Papa Madiaw Ndiaye is the Founding Partner and CEO of Advanced Finance & Investment Group LLC (AFIG), a private equity fund management company founded in 2005 in Dakar, Sengal. AFIG invests in successful, home-grown African companies, providing the capital they need to expand as well as additional services such as financial advising and debt capital raising. Mr. Ndiaye believes that job creation is “the most tried and tested route out of poverty,” and invests strategically in sectors such as agribusiness, energy, infrastructure, light manufacturing and financial services that have a high demonstrated impact on poverty reduction.

Mr. Ndiaye advocates for increased investment in the continent, predicting that “Africa will surprise the world with some of the biggest multinational companies by the end of this century.” He challenges investors and business executives to visit the continent to correct misperceptions and see the diverse investment opportunities for themselves. He expects that in the next few years Africa will emerge as a global investment destination and companies that have invested early will be well rewarded.

Previously, Mr. Ndiaye served as Managing Director at Emerging Markets Partnership where he was one of three partners to set up the $407 million AIG African Infrastructure Fund in 2000, the largest pan-African fund to date at the time. The same year, he was named both Special Advisor for Economic and Financial Affairs to the President of the Republic of Senegal and Chairman of the Senegalese Presidential Economic & Financial Advisory Council. In 2004, Mr. Ndiaye was selected as a “Young Global Leader” by the World Economic Forum of Davos.

Mr. Ndiaye has been a key member of IGD’s Frontier 100 since 2009 and recently participated in the Frontier 100 Forum in New York in October, 2011. He attended IGD’s annual Leadership Council meeting in December, 2011 in Washington, D.C.