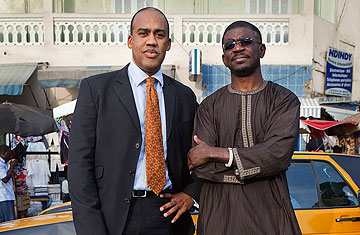 The oil-rich african nation of Chad has rampant corruption, unclean water, few tarred roads and patchy electricity. It ranks as the world’s second most dysfunctional country, after Somalia, according to the 2011 Failed States Index of the Washington-based nonprofit Fund for Peace. In short, Chad seems a nightmare location for business — unless, that is, you are Papa Madiaw Ndiaye, 45, or Patrice Backer, 44, of Advanced Finance & Investment Group, a private-equity fund-management company in Dakar, Senegal, that has so far invested about $72 million in African financial institutions, agriculture and mining. Ndiaye, the fund’s CEO and founder, and Backer, the chief operating officer, have been plotting how to get rich ever since they became best friends as freshmen at Harvard University and worked together at JPMorgan. Decades later, their most lucrative prospect last year was a bank in Chad. “It’s like low-hanging fruit,” says Ndiaye, describing the investment climate in Africa. “There is no competition. If you know what you’re doing, it is a bonanza.”

Such bonanzas — opportunities in troubled places with huge needs — are increasingly being sought out by a fast-growing group: Africans who have returned home after years of living, working and studying in the West. Though still a small subculture, African executives who have abandoned high-flying careers on Wall Street, in the City of London and in other financial hubs are becoming a force across the continent, their impact far outstripping their numbers. By moving home, they and others are bucking the trend of generations of Africans who headed west in search of brighter prospects, better education and decent jobs — and stayed abroad for good. Millions of African families have been kept afloat for decades by remittances from relatives working abroad as everything from street cleaners to physicians. Now with economic prospects and, in some cases, political stability improving in Africa while both are declining in the West, some of those relatives have concluded they are better off back home. “There is a momentum among young, upwardly mobile people to come home,” says Rolake Akinola, a Nigerian business analyst with years of work experience in London. “We call ourselves the Repatriate Generation.”

The generation is a product of two colliding forces. The first is the global economic crisis of 2008, which resulted in millions of lost jobs in the U.S. and Europe and dampened employment prospects even for the best and the brightest. The other is the rocketing value of commodities, many of which are found in Africa. This has drawn new investment to the continent and pushed up growth. The upturn has been helped by deregulation in several countries, which has opened new industries to private investment, and also negotiations to end violent conflicts in places like Liberia and Rwanda. A report last year by McKinsey & Co. found that Africa’s annual growth rate averaged 4.9% from 2000 to 2008 — more than twice the pace in the 1980s and ’90s — and was likely to continue for some time as its middle class grows. Consumer spending on the continent could reach $1.4 trillion by 2020, the report claims. “If recent trends continue, Africa will play an increasingly important role in the global economy,” it notes.

Companies trying to crack these markets are scrambling for local expertise. That has set off a recruiting frenzy for talented Africans, particularly those with work experience in the West. “Every time we have a good person working for us, they get a lot of job offers from other companies trying to lure them away,” says Patrick Dupoux, a managing director at the Boston Consulting Group who last year opened the company’s first Africa office, in Casablanca. He says BCG is bringing several Africans from Europe and the U.S. to the continent, some of whom are in their late 20s and fear that their careers would inevitably “hit a glass ceiling” in the West. By contrast, he says, “most people here think they can make it to the top, and it is really feasible for them to do so.”

Solomon Asamoah, 47, a Ghanaian whose family moved to Britain when he was 4, certainly believes it. Asamoah worked for HSBC in London for years before joining the World Bank in Washington, where he befriended Ndiaye. The two began riffing about future dream projects, including building businesses that could modernize Africa, but never really believed that their dreams would come to pass. In 2007, Asamoah finally moved to Lagos, Nigeria, where he became chief investment officer for Africa Finance Corp., a locally based investment company focused on Africa’s dire infrastructure needs like power plants, roads and rail lines. To Asamoah, the grueling aspects of living in Africa — like powering his home in Lagos with a diesel generator — are clues to how much money can be made there. Nigeria’s new President, Goodluck Jonathan, has made providing electricity for Nigeria’s 135 million people his top priority, sparking intense competition for contracts among hundreds of power companies. “Companies are salivating at coming in,” says Asamoah, whose firm invests in companies developing infrastructure. “Even without power, Nigeria is growing at 7% a year,” he says. “Can you imagine what will happen when most of the country has electricity?“

The need to jump quickly at new opportunities on a fast-moving continent is a lesson Ndiaye and Asamoah say they learned in Nigeria, where the two were on a brief business trip in 2000. “We were sitting around Lagos, realizing we couldn’t make a phone call because there were only 400,000 landlines and no mobile-phone service,” Ndiaye says. Within four months, two mobile-phone companies opened. Today Nigeria is Africa’s biggest mobile-phone market, with 83 million handsets. The friends are also eyeing countless new prospects that aim to capitalize on the needs of Africa’s burgeoning middle class, including thousands of young members of the Repatriate Generation. Such people “want all sorts of things, like the newest TV and good yogurt,” Asamoah says. Ndiaye says that for years in the U.S., he, Backer and Asamoah “would talk about the M&A deals in Latin America and Asia and wonder when they would happen in Africa. We figured perhaps when we were 70 years old.”

Decades sooner than that, the three friends are riding the boom. They converged in Lisbon in June for the three-day annual meeting of the African Development Bank, a lending institution to which 53 African countries belong. When Time met with them in the suite of Ndiaye’s luxury hotel to discuss their lives, they lounged in bespoke suits and ties, looking the picture of success. The men say the bank’s annual meeting has become a key place to scout for deals in some of the industries in which they invest, like services for mines or food processing, and to seek new talent to work with or hire. When I tell them I have just met Helder Jardim Balsa, a 26-year-old Angolan who graduated last December from the University of California, Los Angeles, and now runs an environmental consultancy in Luanda, Angola, Ndiaye grabs a pen and asks for Balsa’s number. “We’re always looking,” he says.

In fact, after years of attempting to persuade skeptical young African émigrés to return home, Ndiaye, Backer and Asamoah say they are mobbed at meetings like the one in Lisbon by educated, skilled Africans seeking advice on whether to make the move. So fierce is the interest that Ndiaye says he has begun trying to tamp down the expectations of young Africans, some of whom anticipate red-carpet treatment when they arrive home. “I tell them there is no one waiting at the airport saying, ‘Oh, you went to Harvard? Which ministerial post do you want?'” says Ndiaye, who earned an M.B.A. from the University of Pennsylvania’s Wharton business school after getting his undergraduate degree at Harvard. “There are so many people now with the same DNA fighting to get ahead,” he says. Despite that, the group insists that most returnees rise faster in their careers than Africans who remain in the financial industry in Europe and the U.S. And they don’t doubt which option is more compelling. “This is the most exhilarating, interesting, exciting — and depressing — thing I’ve ever done in my life,” Asamoah says.

It’s the depressing part of moving back that gives many Africans abroad pause. Despite the upbeat tone at the African Development Bank’s meeting, where about 2,000 bankers and executives attended panel discussions and negotiated deals, several young Africans there told me they remain daunted by what they would face in returning home, things like the lack of finance capital, infrastructure and basic middle-class conveniences. Cheick Sanankoua, 27, a tall, lean French Malian who was raised in Ivory Coast and is in the 2012 M.B.A. class at Harvard Business School, says he has begun weighing where to go next. He is considering joining his brother in the family air-conditioning business in Mali’s capital, Bamako, or working for a big company in Africa. He is also interested in joining a private-equity firm in Africa, but he says he is frustrated by the lack of venture funding. “Banks are just not helping,” he says.

Indeed, the African Development Bank’s Annual Development Effectiveness Review provides a catalog of woes for business on the continent. Among them: only 10% to 12% of African trade is between African countries; the rest is with Europe and the U.S., China and other countries (much of that in commodities). Economists and aid officials argue that if Africa boosted its intraregional trade, it could better share scarce resources like power and water and vastly increase the number of customers for African businesses. Airports are overstretched and outdated. Seaports are underequipped. Roads are mostly dirt, and many are impassable. It will be decades before Africans enjoy universal access to electricity, which the developed world has long taken for granted. Despite the optimism of the Repatriate Generation, the report notes that “African business is held back by excessive and poorly designed regulation, limited access to finance and a lack of legal mechanisms for enforcing contracts and protecting property rights.”

The problems are real enough. But so far, none have forced Ndiaye, Backer or Asamoah to abandon their African careers and head back west. Like good frontier investors, they insist that those who are on the ground will snag the best opportunities first. “You cannot do this from New York or Washington and just hope for the best,” says Ndiaye, who nonetheless acknowledges that life is a lot easier — if duller — in the West, without continual blackouts, bad roads and other daily logistical hurdles. “Africa is not for everyone,” he says. “In fact, it’s for very few people. That is part of the fun.” With a generator roaring in the background, he flips open the business plan of yet another prospective entrepreneur looking to fund his dream.